Remember the movie, The Big Short? It was a biographical comedy-drama about the U.S. Real Estate housing bubble that peaked in early 2006 and reached it's lows in 2012. Thus, the credit crisis and recession in the United States. We Canadians felt immune and safe, and mostly we were. We didn't indulge in subprime lending - lending to people without adequate downpayment or credit score or income. They were risky mortgages with less favourable terms and higher interest rates to compensate for the higher risk.

In 2008, as a safeguard, Canada's Department of Finance reduced the amortization maximum from 40 years to 35 years. They also introduced a minimum requirement of 5% downpayment, proper documentation regarding borrower's income, and evidence of a property's value. A borrower's credit score had to be a minimum of 620.

(Side note, Beacon/FICO scores have gone through periodic changes over the years. 620 is no longer a healthy score. 2019 will bring in the UltraFICO which would include your savings quotient in the overall scoring assessment.)

Back in 2008, the average 3 year fixed mortgage rate was 7.5%. Within a few years, this rate would see a decline down to the posted 3.4% where it remained until August 2017. With the decline in interest rates came the increase in Real Estate prices in the GTA. Vancouver saw a different picture. They had the added influx of Chinese investors that flooded their market, some of which spilled over into the GTA. British Columbia was also plagued by money laundering which drove up prices, but for the purposes of this blog we are focussed on the GTA.

At play too were the affluent Baby Boomer generation who were influencers in the Real Estate market by virtue of bequeathing a living inheritance to their adult children. 47% of the Baby Boomers are still willing to subsidize their children's house purchases. A significant portion of Millennials could thus afford their first home.

By December 2015, the Department of Finance announced that any portion of a purchase above $500,000 required a 10% down payment. July 2016 as the markets continued to increase, the B.C. government introduced the 15% foreign buyers tax for Greater Vancouver Area. Ontario sat and watched the outcome of this new housing measure.

In October 2016 the Stress Test, as a requirement for financing, came into effect for all high ratio mortgage (80%+ mortgage, loan to value) using the 5 year posted rate as a benchmark.

March 2017, Canada Mortgage And Housing (CMHC), the insurer for most high ratio mortgages, increased their rates by 12-15%. The next month, in continued effort to cool the housing market, the Ontario government announced the 'Fair Housing Plan" which implemented a 15% foreign buyer's tax and an expansion of rent controls.

In an effort to prepare for the unexpected, the OSFI* revised guideline B-20. Starting January 2018, not just High Ratio but all mortgages through Federally Regulated lenders (excludes Credit Unions) including refinances with a new lender, had to comply with the Stress Test. Borrowers had to qualify at the mortgage rate + 2% or the 5 year benchmark fixed rate as published by the Bank of Canada. The maximum LTV ratio (loan to value) could not be circumvented, and a greater due diligence in terms of intended use of loan, type of purchase, and type of refinancing was expected.

The Bank of Canada has raised the benchmark interest rate five times since mid-2017, largely because of a strong economy. Possibly two more rate hikes are expected in 2019.

While overall prices of houses in the GTA have significantly come down since the peak in 2017, the cost of Condominium units has not followed the trend. As virtually the only affordable piece of Real Estate since the Stress Test was introduced, people continued to buy or invest in Condominiums. Prices continued to increase. 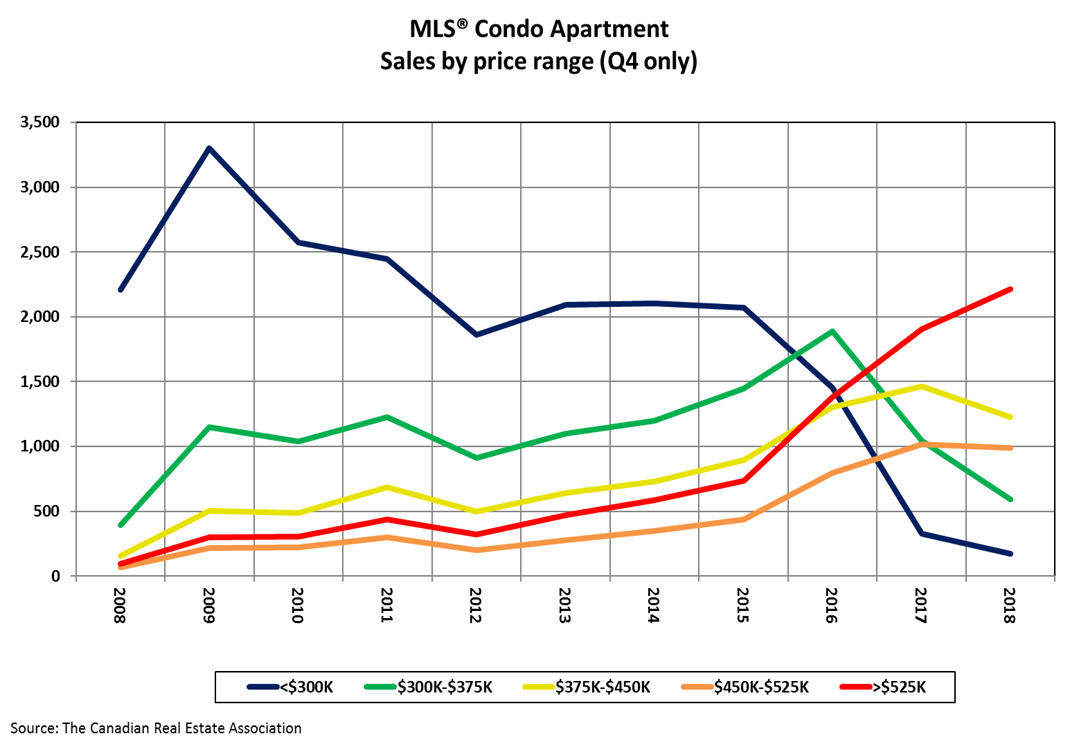 Those people who were pushed out of the housing market because of the Stress Test have had to resort to renting or moving back home with the folks. Not surprisingly this caused the cost of rentals to also skyrocket.

Back to the significance of March 19th

March 19th is the date set for Finance Minister Bill Morneau to introduce the Liberal government's pre-election budget. One of the topics to be discussed will be ways in which the government can help more millennials get into the housing market by making it more affordable to buy or rent, while keeping the housing market stable.

It's an election year and this coming October Baby Boomers and Millennials will cast their votes. With the Liberals wanting to be remembered fondly, it's likely that we will hear some good news with respect to the affordability of housing during the March 19th pre-election budget.

*The Office of the Superintendent of Financial Institutions is an independent agency of the Government of Canada reporting to the Minister of Finance created "to contribute to public confidence in the Canadian financial system" [source: Wikipedia]