Prefabricated Or Modular Homes Have Been Around A Very Long Time

Curiosity got the better of me when I found an article about prefabricated houses being sold by Sears, Roebuck and Co over a hundred years ago. I wanted to know more.

Prefabricated, or modular, homes that were started in one place then shipped to their final destination, date back over 900 years to the 1100's when Poet Robert Wace wrote in his poem Roman de Rou "They took out of the ship beams of wood and dragged them to the ground. Then the Count who brought them, already pierced and planed, carved and trimmed, the pegs already trimmed and transported in barrels, erected a castle, had a moat dug around it and thus had constructed a big fortress during the night."

Modular type homes next came into view during Akbar's rule in late 1500's India. Akbar 'the great' was the third Mughal Emperor and was known for his many accomplishments including successful military campaigns, advanced weaponry, and improving agriculture and conditions of the land. The Mughal Army used pre-fabricated, movable structures for building semi-permanent castles as they moved across Central India to consolidate the Mughal Kingdom.

When Great Britain started colonizing the Americas, Australia, Africa, Middle-East etc, they relied on materials from home and manufactured components to be shipped to various outports around the world. As early as 1624 house kits were sent to a fishing village in Massachusetts. Storehouses, cottages, and a hospital were shipped to Sydney Australia by 1790's. South Africa saw prefabricated three-room wooden cottages in 1820. They were shed-like with precut timber frames and with weatherboarding or board-and-batten siding that was trimmed and fixed on the site.

Renowned British Engineer and Architect Isambard Brunel who is listed 2nd in '100 greatest Britons' after Sir Winston Churchill, designed a prefabricated hospital for Florence Nightingale suitable for 1,000 patients during the 1855 Crimean War after being advised of the sanitation problems. Brunel first erected an experimental model at the Great Western Railway at Paddington so that other professionals could examine and critique it. Within 5 months, Brunel's team designed, assembled, and shipped the wooden and canvas buildings to its destination. Instructions on transport and positioning of the complex of 36 main plus other buildings, as well as improved sanitation, ventilation and a flushing toilet were also included in the shipment. These new structures drastically reduced infection rates. There were fifty times fewer deaths than in the Scutari Hospital it replaced. 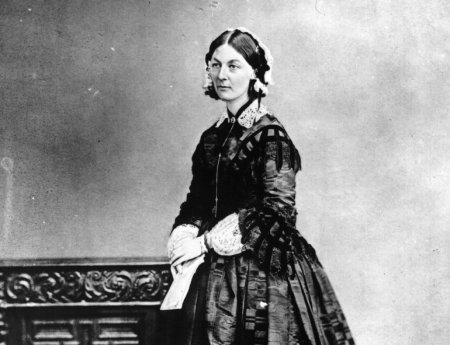 In 1906, Sears, Roebuck and Company, designed and assembled kits of all the parts required to build an entire house and sell through mail order. They introduced their specialty catalog for houses, Book of Modern Homes and Building Plans, in 1908 with 44 house styles. About the same time, another company called Aladdin based out of Michigan, was started by brothers William and Otto Sovereign. Before closing their doors in 1981, the family-owned business sold more than 75,000 homes domestically and internationally. They even developed entire neighbourhoods and a town, Hopewell Virginia. Their mottos were "Ready-cut" ad "Built in a Day". 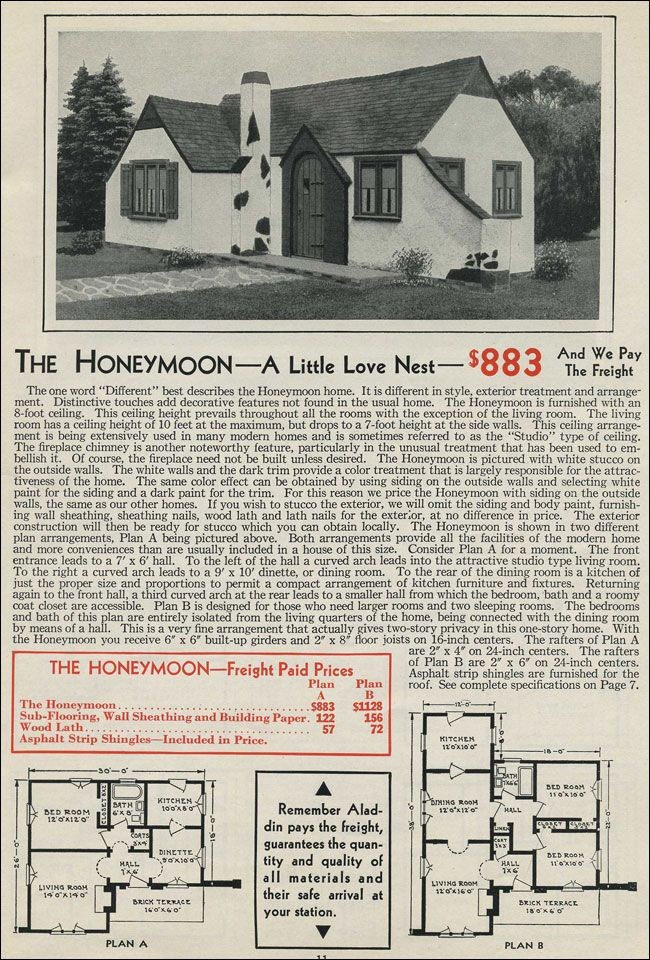 While other prefab home companies faltered, Aladdin kit homes survived the depression era by maintaining their attention to quality and use of best available materials. They also did not expand to doing custom projects like so many others. When Sears closed it's doors on the kit home business, Aladdin was in position to ship housing to troops during WWII.

Iconic Architect, Frank Lloyd Wright, also ambitiously sought to design and sell 'attainable architecture'. Between 1915-1917 he used precut factory lumber to save on costs and labour, and had Arthur Richards build "The American System-Built Homes" on the 2700 block of West Burnham Street in Milwaukee. He followed with more sketches for this projects than any other in his career. His concept was to let machines do the work, letting humans take care of more high-level design. A century ahead of his time, his small spaces had open layouts and were instinctively connected to the outdoors by use of techniques like 33 windows in an 805 sq' home.  “These homes are enormously significant,” says Michael Lilek, a local preservationist involved in restoring and preserving a collection of these rare Wright prefabs. “The earlier Prairie School homes that Wright built were for customers with deep pockets. These showed Wright wanting to create space for everyone, his broadest gesture to a wider audience. It’s him saying that every person could live a better life if they could live in an architect-designed home.” 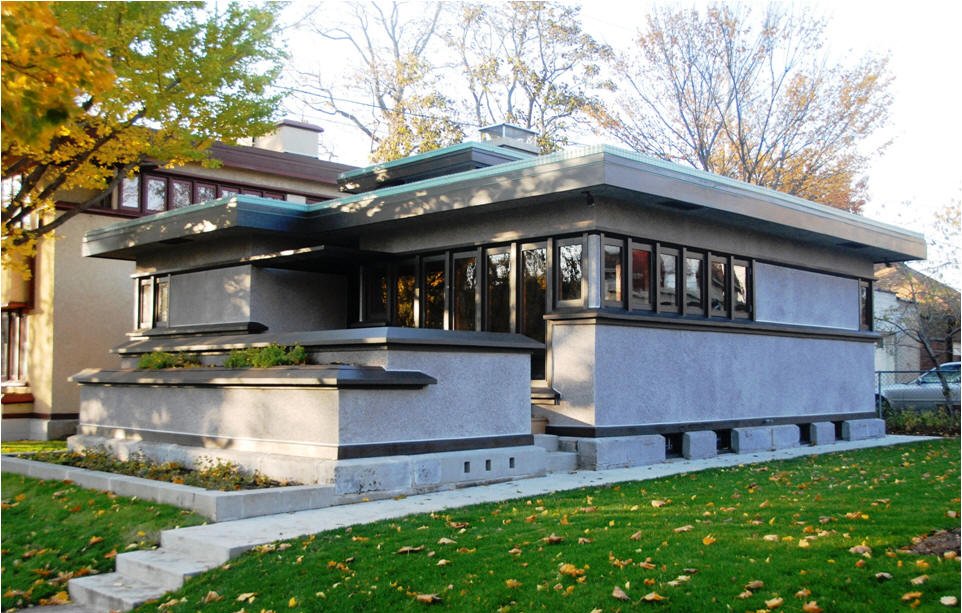 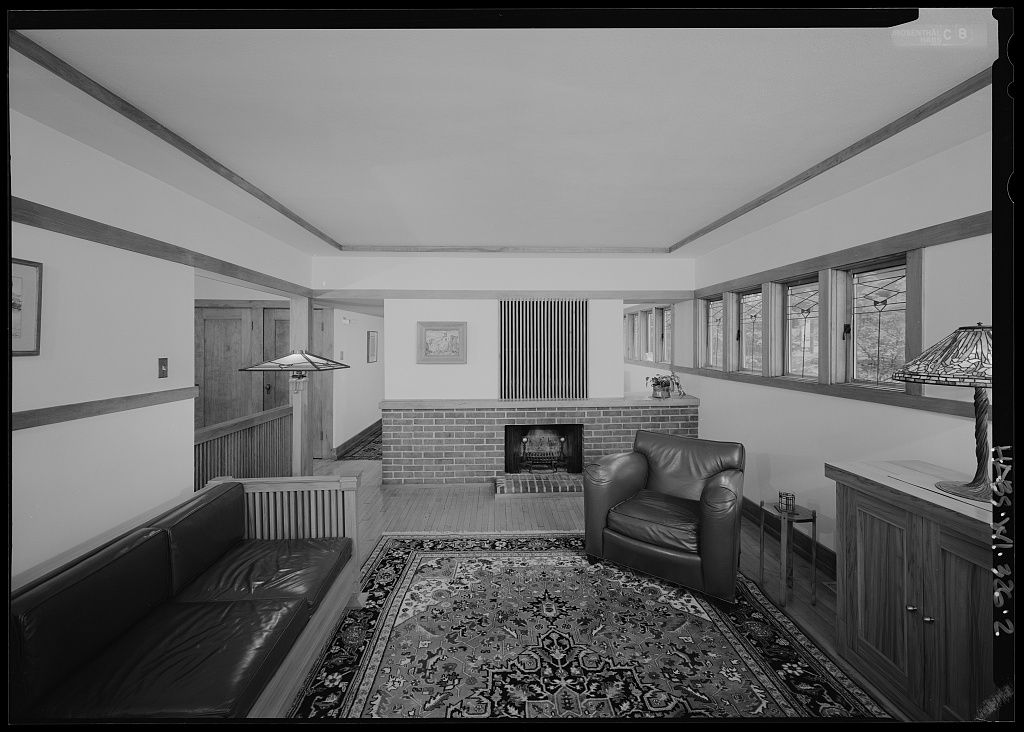 Not just for use in residential housing, the town of Uxbridge in the west end of London received a 120 room Travelodge Hotel circa 2008 that was delivered from China in modules. British company Verbus Systems, builds rooms in metal containers near Shenzhen China and delivers them ready to be stacked as high as 16 stories. The overall cost was approx 20% less than by using conventional methods. The company can build a 300 room hotel to be shipped anywhere in 20 weeks. You may recognize the Holiday Inn on the photo to the right from Yorkdale area Toronto. It was built in modular style, in the late 1960's or early 1970's. 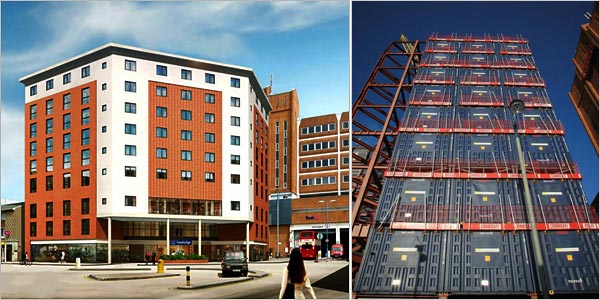 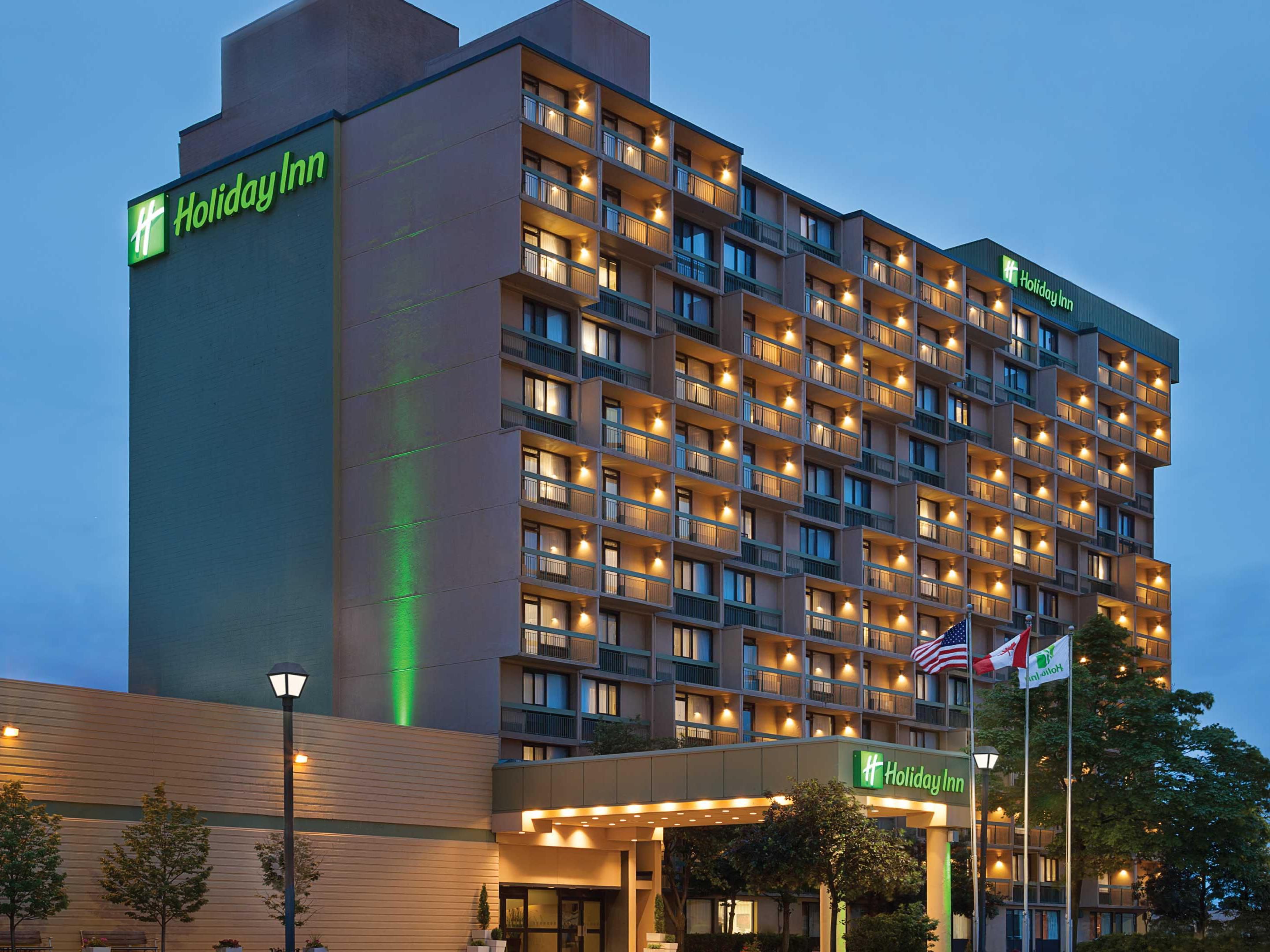 If you have 22 minutes to spare, enjoy comedian Buster Keaton's 1920 'One Week' take on a wedding gift prefab house. It even sustains a tornado. Sort of. 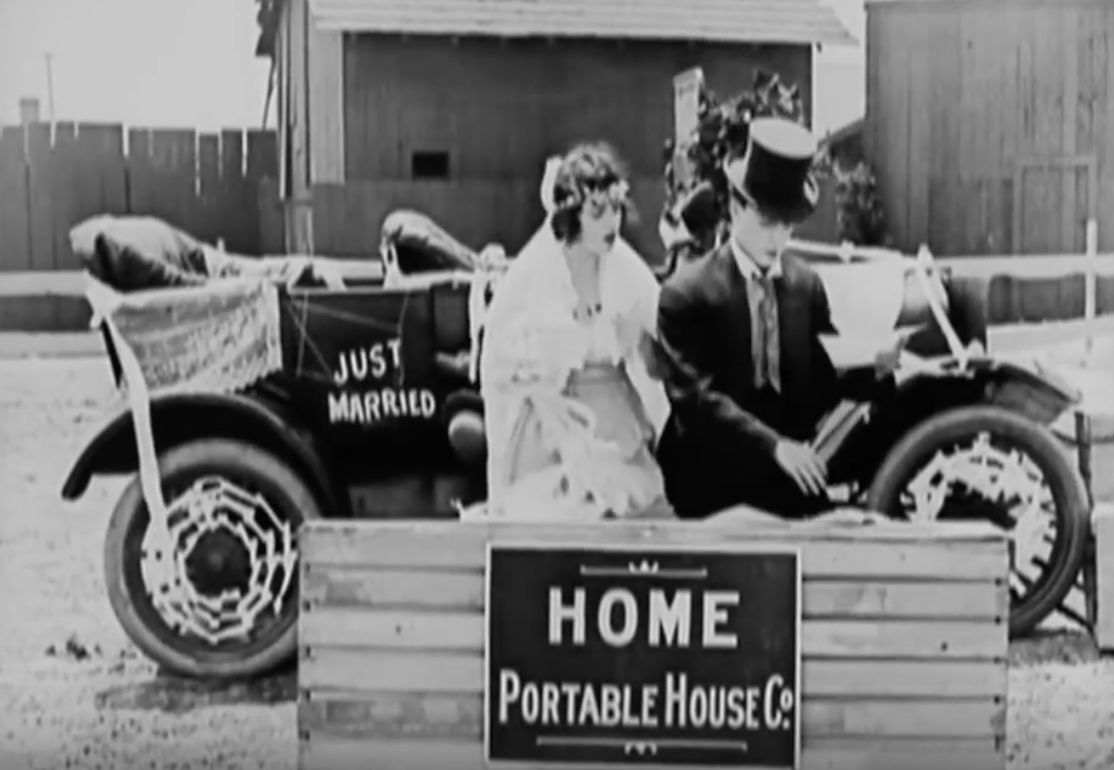 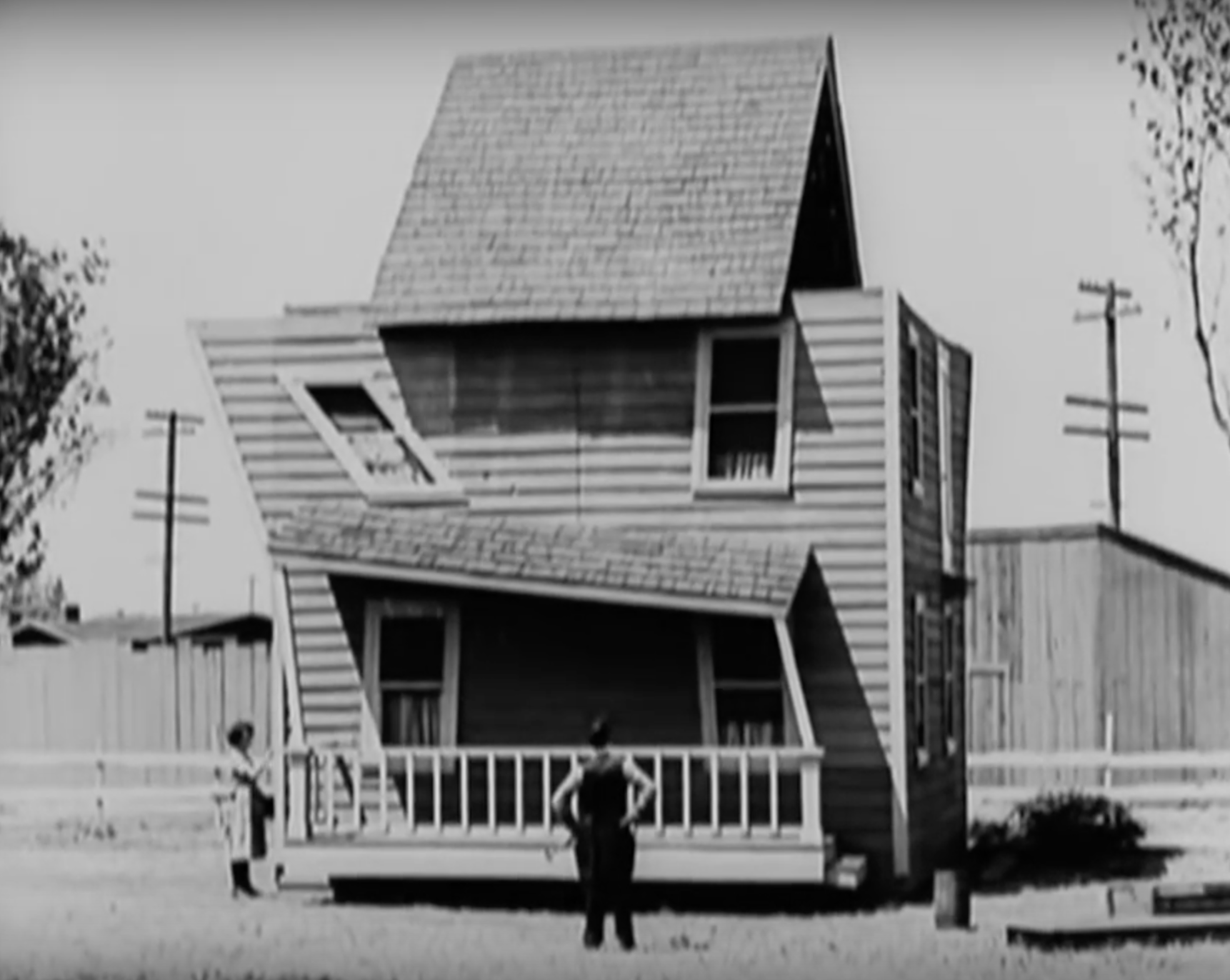 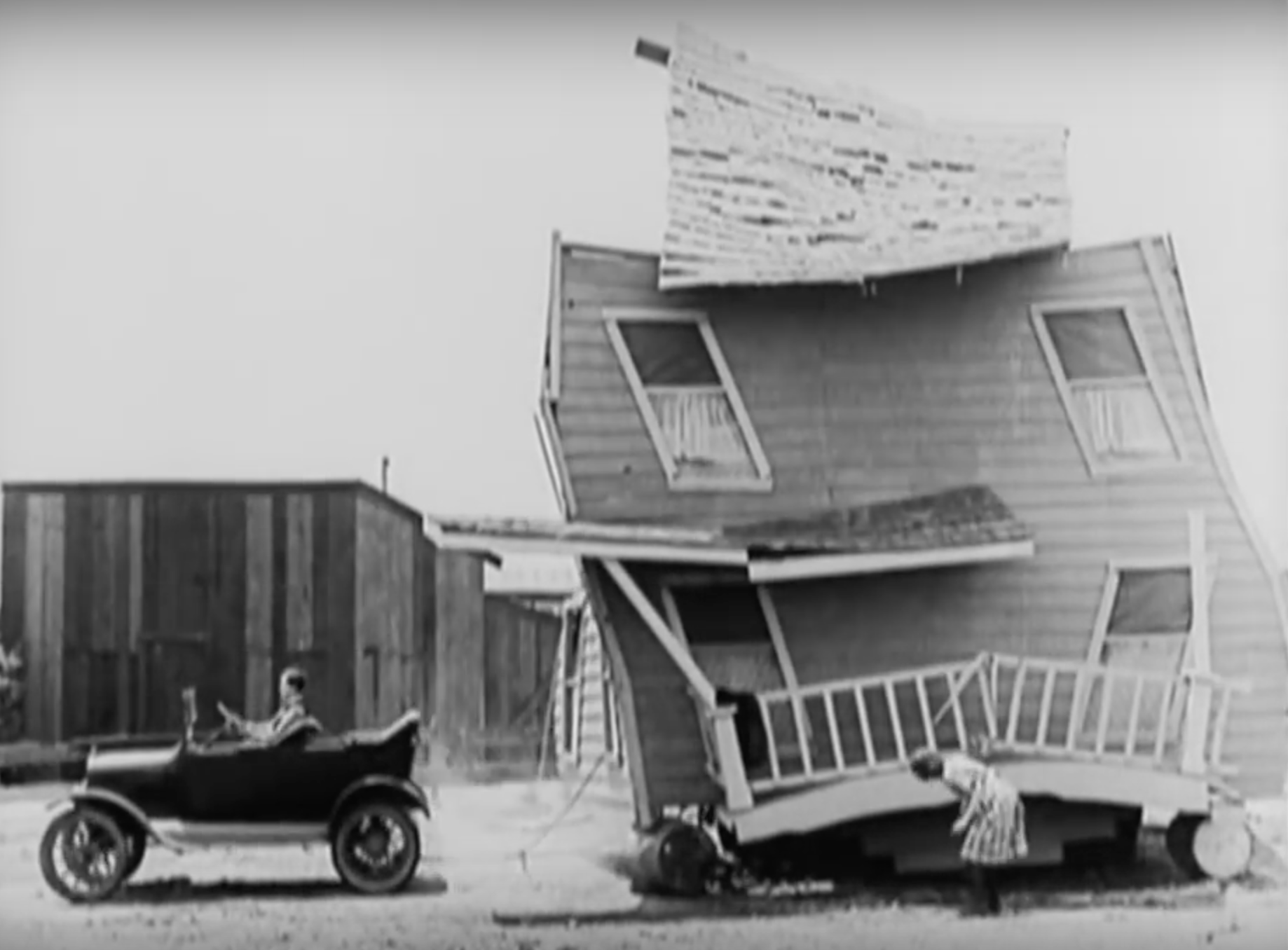