It might be time to cash in on Real Estate 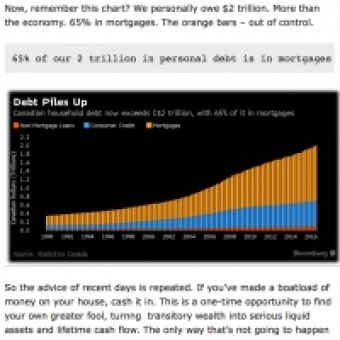 Garth Turner, in his blog 'greaterfool.com' thinks it may be time to cash out of Real Estate.

Oil cratered at $27 a barrel. Wow, a 70% collapse. The Canadian economy was sinking too, actually in recession. The TSX was a mess. China was the big news – volatile markets, flaky leaders, rampant speculation by little investors. On the horizon was Brexit. Trump also (although he was too weird to take seriously). US data was weak. Markets were weak. The Fed looked weak. Negative yield bonds. Preferreds tanking along with rates.